Reality is merely an illusion, albeit a persistent one.
~ Albert Einstein

What's going on with the spoon dangling from that bracelet? 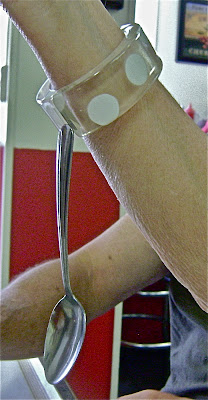 This is my aunt's bracelet. A group of us went out to breakfast. She lifted her arm and felt something heavy on her wrist. She couldn't believe a spoon was sticking to her bracelet. She removed it, but the next time she lifted her arm, it happened again! How could that be?

Simple: Her bracelet comes apart in two separate equal-sized pieces. Each piece has magnets built into them to hold the bracelet together around her wrist. The magnet attracted the silverware on the table.

I wonder what she'd pick up wearing that bracelet in a jewelry shop? Imagine her walking out with a pricey metallic piece and not realizing it. She could end up in prison!


Magnetism is one of the Six Fundamental Forces of the universe,
with the other five being Gravity, Duct Tape, Whining, Remote Control,
and the Force That Pulls Dogs Toward the Groins of Strangers.
~ Dave Barry

Can you think of any other strange scenarios that could happen with a bracelet like that? C'mon now, stretch your imagination and have some fun!

Posted by LynNerdKelley at 6:23 AM

I can see the security alarm at the airport going off!

With that bracelet, I wouldn't have to worry about leaving my purse somewhere - it has magnets in it, and would make a big thump even though it's too heavy to stick!

It'll cause havoc with the train doors!! Take care
x

Why is it that I'm imagining two teens fumbling in their first makeout session, and the girl's bracelet sticks to the boys braces?

This is soo neat. I shall email this to my son so he can show it to my grandson. Thanks for sharing:)

That's kind of cool, I have to admit. Magnetism...such a strange natural force.

Fun picture. And I love the Dave Barry quote =D

Okay, somebody didn't think that bracelet design all the way through!

Could be stuck forever to the refrigerator door. Too funny!

Love that Dave Barry quote - he's such a brilliant man! :)

I'm having this terribly embarrassing image of a hand being attracted to a chastity belt...

The quote from Dave Barry, what a scream.

Alex - I bet you're right. That bracelet probably would set off the security alarm!

Jennette - There you go! You thought of a practical reason to wear that bracelet! :)

Joshua - You're definitely a writer, and that scene would be a hoot to read in a book!

Munir - So nice to see you again! I hope your son and grandson get a kick out of this! Thank you!

Michael - I agree, magnetism is very strange. Amusing and strange!

Ruth - Thanks! I'm glad you like that quote. It cracks me up!

Dianne - No kidding! They thought they were being so clever when they designed it!

Tricia - Stuck to the refrigerator door! I guess that better than the train doors because at least you wouldn't starve being stuck to the fridge! :)

At least she wouldn't have to worry about losing her keys in her handbag :)

That Dave Berry quote is a riot! I was thinking your aunt just had a magnetic personality, but alas, it was the bracelet. Still, I bet she's pretty awesome.

Both of those quotes are terrific. Let's see, depending on how strong those magnets are, that bracelet could wreak havoc with the strip on her credit card and with her color TV. Or could summon UFOs to her like a homing beam ... (No, huh?)

What if her bracelet is attracted to someone's bra hook? Lol!

Alarna - Now that's a great idea - using the bracelet to find her keys. I could use it for that, too!

Tameri - A magnetic personality! *giggle* Actually, that's a perfect way to describe her!

Susan - Those are some great ideas! The UFO homing beam, what a hoot! I love it!

Jess - Yes, attracting quarters and Susan B. Anthony dollars! That could all add up to a good sum! I never would have thought of a chalkboard. That's a funny image. And helping to hold on to the pole on a bus, not a bad idea at all! Good going!

Nas - Attracted to someone's bra hook! *snorts and laughs* You, indeed, are a romance writer!

What a cool bracelet! Love the Dave Barry quote too.

Sorry, my imagination is on strike today, so I can't play along. ;)