My good friend, Stephanie Jefferson, is beyond excited, as most writers are when their debut novel is about to come out, but this is an extra-special time in Stephanie's life. You see, she had a close call with death in September. Her doctors tell her she's lucky to be alive. It's one of a writer's fears, not living long enough to see the book they poured their heart and soul into become published.


That joyful day is fast approaching for Stephanie. In February, just in time for Black History Month, she's launching her novel, PRINCESS KANDAKE - Warrior By Choice....Appointed to Rule. All the work Stephanie put into designing
and making the costume for the model
to wear paid off big time. Isn't this an amazing cover? 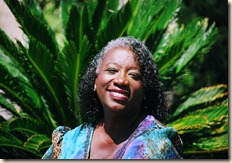 The members of our writers critique group, Books Born Here,
are thankful our dear friend survived pneumonia,
followed by a major heart attack a few months ago.
Her husband, a retired fire fighter, performed CPR until the paramedics arrived.
She's still receiving cardio-therapy, but she's already made amazing progress,
just in time to do a week-long book tour in February to launch her baby!

Here's an excerpt from Stephanie's blog post of November 20, 2011 that explains the inspiration behind PRINCESS KANDAKE (pronounced Kon-da-kay):


I have the most beautiful granddaughter on the planet. . . She loves to play dress-up. One day she came to me and said, “Nana, I want to be a princess, but they don’t look like me.” She was pointing at a Disney ad. “Where are all the beautiful brown princesses?”

That got me started. I was on the hunt. My daughter (her mother) and I started pointing out every princess of color we could find. We looked everywhere, at every book, poster, and magazine available and even some that weren’t.

It occurred to me that Cinderella, Sleeping Beauty, etc. were sitting on the bookshelves of every library and close at hand for anyone to pick up, anyone except my granddaughter. Being who I am, I couldn’t rest until I did something about it and I wanted a story that would not be time-sensitive and could even become a classic. (Why dream if you can’t dream large!) The research began.

I needed someone from history and the further back the better. I hit upon ancient Nubia. Learning of the power and far reaches of this ancient kingdom were perfect! I started with a picture book, but the tale outgrew that format. It is now a Tween novel filled with adventure, action, conflict, and a hint of romance.


This ancient kingdom is revived in Stephanie's novel, thanks to her extensive research. I wasn't familiar with Nubia until she read chapters of her work-in-progress to our critique group. Nubia is a very real place to me now. So are the characters, although Stephanie says they're fictional, but I'm not so sure about that!


I'm fascinated by the years of research and rewrites that have gone into this work and the great lengths Stephanie went to for the cover design, which is a story in itself.

This is one of the shots Stephanie considered using
for the cover before deciding on the pose above.
In next Wednesday's post we'll learn how Stephanie made an authentic-looking breastplate, a beautiful sarong, and some other cool facts about the making of the cover.


Have you ever heard of Nubia? Do you like historical novels?


(Friends, I'm dealing with some difficult issues right now, so if I don't comment back right away, please know that I will as soon as possible.)

Posted by LynNerdKelley at 2:04 AM

Even the backstory is a fairytale with Stephanie's husband as the prince! I hope Stephanie is strong as ever for the book tour, and best of luck with this beautiful book!

Hope everything is ok with you Lynn.

I've never been to Nubia, but I've heard of it. I haven't been to many places outside of the US. Sad!

Yikes what a time! The books wonderful, best wishes.

And Lynn I love your new header!

Lovely lovely book cover and beautiful Nubian warrior princess too!! Thanks for the info on this book and big hello to Stephanie Jefferson! Take care
x

I'm so pleased that she wrote her story and it's so neat that her granddaughter gave her the inspiration to do so. We need more types of this historical fiction out there!

Beautiful cover! I like that Stephanie's granddaughter inspired her book. Very sweet.

I'm so excited for Stephanie. That book cover is fantastic and should draw readers to her wonderful story.

How exciting. Congratulations to Stephanie. Yes I have heard of Nubia and I would LOVE to read this book. (The cover if fantastic.)

Congratualtions to Stephanie. The cover is beautiful. I never heard of Nubia, but I will see that I can ask for a copy in the library.
This is so nice of you to blog while having so much on your mind.
Please eat right and on time. In times of stress, not eating on time can get a lot out of you. Take care.

I am so happy to hear that Stephanie is doing better--I've been holding her in my prayers since you mentioned her troubles, Lynn!!

The cover art is amazing! And I love the backstory. I can't wait to see this book and it's successes!

Thank you all for your wonderful encouragement and comments. You know firsthand what an awesome person Lynn is. Well she's even greater as a FRIEND. We met in a critique group in Riverside, CA and if you haven't had the opportunity to enjoy HER writing you're in for a treat. What ever her fingers tap out on the keyboard is golden! Her humor had us choking with laughter. Let's just say I'd wait until after we read her work to drink or eat anything.

Thanks Lynn! You're wonderful!

Yes I have read about Nubia. It came up in my Egyptian period (I.E. when I was about thirteen and read everything I could about ancient Egypt).

I think it's a great idea to write about a Nubian princess.

So glad to hear that Stephanie survived her brush with death. :-)

Congrats Stephanie. It sounds like a wonderful book. Glad to hear you are doing better.

I most definitely have heard of Nubia. Wasn't the Queen of Sheba from there? Sounds like a FANTASTIC novel.

I'm glad I came by today. I've been wanting to read this the book since I first came across it. Might have been here. Inspiring story indeed of how the novel came to be.

BTW - hope your challenges get sorted out soon, Lyn.

Fantastic cover, Stephanie. All the best with your new book!

LOVE the cover!!
Congrats to Stephanie!

Here's all my best for a successful launch. Based on what you've said here and the way your cover looks I'd say you're well on the way to a more than successful book.

Love the standing shot rather than the creeping one on the ground. Power instead of submissiveness.

I hope your issues are soon resolved.

Thank you all for your wonderful comments of encouragement! This book has been a long time coming and I'm glad that the time is finally here. My granddaughter is now 8 years old and is beginning to experiment with her own power and strength. I'm super excited about the launch. By the way, Al, the Queen of Sheba is believed to have come from Ethipoia, which was Aksum (or Axum, either spelling is correct) at the time. Her name is thought to have been Makeda, which is the same as my cover-model.

I want to thank all of your for your comments, too. Even though I haven't had a chance to respond to each one, your comments always light up my days!

This is SO cool! I've heard of Nubia, and am interested in learning more. Great post! Nice to meet Stephanie. =)

I love a good historical novel. I've always wished that we could actually time travel so that I could experience life in different eras, so a well done book lets me do that without the danger :)