Interviewer L. Nerd: Today C. Lee McKenzie has gone to the public with a plea for support in the ongoing (Federation of Feline Familiars) FFF v. C. Lee McKenzie case, now in negotiation. She is trying to avoid a lengthy and costly trial, but the FFF continue to hold firm in their demands. They refuse to back down on their insistence for a rewrite of Alligators Overhead in which they replace the current witch familiars, the Ornofree alligators. 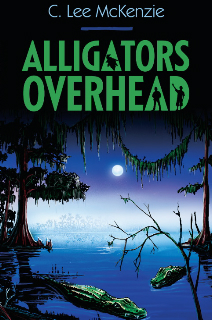 Interviewer L. Nerd: So, Ms. McKenzie, can you summarize what has happened so far?

C. Lee: The FFF has held one Howl-In to protest what they refer to as a threat to future generations. They say my book opens the door to other species who might want the job as witch familiars. The alligators are firm in opposing the cats. They’re prepared to go to court. I’m very concerned that this dispute might even result in hostilities. After all, these alligators know how to declare war. I’d appreciate your readers’ support: letters to the editor of their local newspapers, letters to the FFF whatever. The FFF is already organizing another of those dreadful Howl-Ins!

Interviewer L. Nerd: When did you first suspect you might be in for trouble?

C. Lee: I was blindsided by the FFF’s attack just before my book came out. I thought they’d find my story was an interesting twist on the traditional “cat needs witch,” “witch needs cat” theme. They have centuries of being familiars on the international scene. Hadleyville is one very small point on the map.

Interviewer L. Nerd: They’re demanding a rewrite or what?

C. Lee: Banning my book! And believe me they have a huge political machine behind them.

Interviewer L. Nerd: This dispute has been going for a few weeks. Has there been no move toward a settlement?


C. Lee: Almost none. The FFF had a major conference that demanded we recess until their chief negotiators returned. Al Wisecat and the one they call Champion of the Under Cat are taking the lead on these negotiations, and evidently they both had major presentations at this conference--one paper was Breakthrough on Hair Ball Elixirs, another on The Catnip Conspiracy Theory.

Interviewer L. Nerd: They sound like significant players in the FFF. I read you made an offer to donate a case of dolphin safe tuna to the conference and that it was being considered as a step toward easing the tensions.

C. Lee: I donated several cases, and the Malamutes, who responded to my request for help, donated some ball toys and finally two scratching posts. Unfortunately, the alligators ate them.

Interviewer L. Nerd: So what are your plans when negotiations resume?

C. Lee: I’ll return to the table with these offers: I’ll dedicate my next book to the FFF and donate 10% of any proceeds the first year the book is out. I’ll sign an agreement to never write another book in which cats lose their traditional roles to another species. I’ll replace the cat toys and the scratching post eaten by the alligators. I have received some information that leads me to believe there’s a small break in the FFF ranks. This might mean things will go in my favor. I’m not sure.

Interviewer L. Nerd: Can you reveal what this break is about?

C. Lee: This is a picture that came into my possession showing that tuna might be the pivotal negotiating point. Obviously, some members are interested in taking this part of my offer. 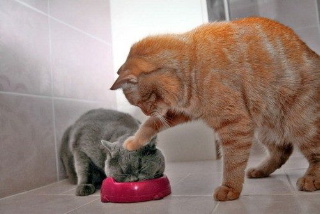 Then there was a dispute following the last round of talks. Some wanted to take my offer. 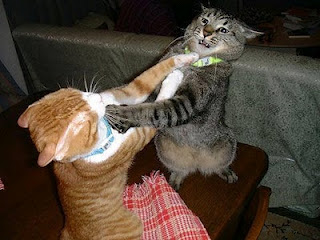 Interviewer L. Nerd: So there you have it. The latest news on FFF v. C. Lee McKenzie. She’s stated she will report the results of this dispute on her blog within the next few days.

"Alligators, witches and a spooky mansion aren't your average neighbors . . . not unless you live at the edge of the Ornofree swamp in the backwater town of Hadleyville. Pete Riley may only be eleven, but he's already up to his eyeballs in big trouble, and this time the town's bad boy, Pete, didn't cause it. This time the trouble arrived when a legendary hundred-year-old mansion materialized next door with someone inside, someone who came to seek him out. Then the Ornofree alligators declare war to try to save their swamp from being bulldozed for a shopping mall, and Pete discovers he's living among a coven of "sadly-out-of practice" witches. When one of their ancient "magick" spells goes wrong and all the witches vanish, including his guardian aunt, Pete's left to face the perils of the Ornofree Swamp War alone. He soon discovers that he just might have inherited the family talent for witchcraft, and, although he doesn't know one thing about the practice of spell casting, he's the only one left in Hadleyville to do it. It's up to him work some dangerous "magick," restore his aunt and bring back all the other witches. He might stand a chance of succeeding if his one friend, Weasel, sticks with him, but even the two of them may not succeed." 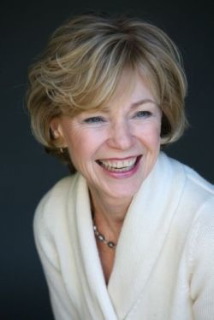 
I'm in the middle of reading Alligators Overhead right now. I can't wait to see how Pete Riley gets out of the mess he's in! C. Lee McKenzie's books never disappoint. This is a fun, entertaining middle grade read. Parents who read aloud to their kids will enjoy this book, too.

Do you have any advice for C. Lee McKenzie on how to fight back against the mean cats? Do you think this issue can be resolved?

Posted by LynNerdKelley at 2:40 AM

One word: catnip. (Turns them into real pussy cats...) Fun post. I started on Julie's blog, and then linked to C. Lee's, and then here. Hmmm, with both the words "weirdness" and "nerd" mentioned in your blog, I feel right at home. I reckon I'll have to sign on as your newest groupie.

Hi Susan! Thanks for stopping by. It's always nice to meet another fun-loving peep who feels at home with weirdness and nerdy! I'll be stopping by to visit your blog soon. Just got back from a trip and am dealing with jet lag. It's so nice to meet you.

This was so much fun! Seems like Lee's negotiations with the FFF might finally get settled! Hope that you're in protective custody just in case! Julie

I like "fun-loving." Weirdness may be more accurate, but we don't want to scare the young kids!

Great to be here.

LOL - great interview! Perhaps Ms. McKenzie can try some cat yodeling (the cats do the yodeling, humans just bring it out in them). I can't do YouTube at work, but go there and search for "Engineers guide to Cats" and you'll find it. Hilarious!

Julie - Ha! Love your comment about Lee being in protective custody!

Lee - Oh no, of course we don't want to scare the kids, although most of them do love scary tales! LOL!

@Jennette I have to see that GUIDE! It will have help, I'm sure.

@Lyn Of course, you're right. A good kiddie scare is great. Can't wait for Halloween when scary is embraced.

Hilarious!
Since the catnip didn't work either, I think you have one more ploy before giving into the cats. Call the fire department and have them turn hoses on the cats! They won't look so dignified dripping wet and running for their lives.

Who would've thought such a seemingly-innocent book could bring up so much controversy?

C Lee, your book sounds great, and I know a way to persuade cats that alligators are the best familiars in swampland. Whisper "nutria" in the cats' ears.

If that doesn't scare them, let the cats know that working the swamp means they're going to get their paws dirty--wet and dirty.

@ Alex I hope those cats don't read this or you might be in trouble.

@Eagle I know. It's all so unexpected. Even my cat is giving me more of a cold cat shoulder than usual.

@Pat Both of those suggestions are now on my list.

Loved this post! I can only imagine the problems that poor Lee is going through. I say distract them with catnip. If that fails I think your other plans should do the trick. Maybe tell them you will write a story about them- in the future... Cats are so hard to please (don't tell my cat I said so).
~Jess

So cute! And you're right the book trailer is awesome. Love the Scooby Doo feel to it. :)

Alex - Turning on the hoses might do the trick, but Lee is right. If the cats get wind of your idea, it could get ugly!

Golden Eagle - I agree. Who woulda thunk it could cause such an uproar? But controversy can help boost sales, so this might turn out to be a good thing!

Pat - Great suggestions. Lee will have to let us know if they work!

Jess - Yes, poor Lee sure has been put through the wringer with those uppity cats. A story about them might just be a good negotiating tool for Lee to try! I promise not to tell your cat what you said!

Pk - You're right about the Scooby Doo feel. How cool!

Lovely post- I agree with Susan catnip-it works with the two moggies that live with me, that and regular food. Surely any animal can be a familiar? What about power animals or is that different?