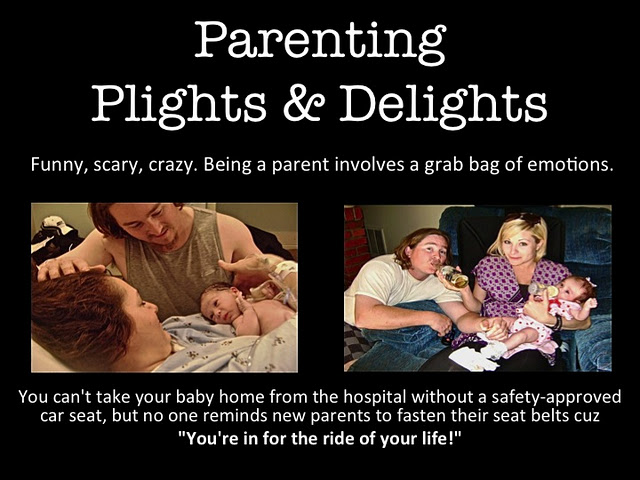 One of my favorite parenting memories is when we threw our oldest daughter, Tulip (nickname), a Sweet-Sixteen party. We wanted to make it an occasion to remember. In order to hire a DJ, we had to cut back on other costs, so I decided I could do the cake myself. No sweat.

We expected over 50 guests, so I baked four cake mixes, which required two roasting pans. I transferred the first layer onto a large tray, but the middle of the cake stuck to the bottom of the pan. Okay, no big deal. I scraped out the middle and fit the pieces back into place like a puzzle. There were huge fissures, but extra whipped cream would take care of that, and no one would be the wiser.

The whipped cream covered all the cracks perfectly. Mm-mmm! The tricky part was getting the top layer out of the other pan in one piece. Tulip grabbed one side as I grabbed the other. We flopped it out onto the bottom layer. Dang! The top had split down the middle. No worries, though. Lots of whipped cream would easily hide that.

Camouflaging the cracks used up all the whipped topping. I still had to cover the sides, so I sent my 17-year-old son to the store for some frozen whipped cream in the tubs.

He returned in a jiff with two cans of whipped cream and told me he couldn't find it in the tubs, and besides, the cans were cheaper anyway. I wondered how he knew they were cheaper if he never found the tubs to compare them.

So, I sprayed a fancy ripple of cream all the way around the cake. "Beautiful!"

Within 30 seconds, the canned whipped cream liquefied and ran down the sides. I rushed the monstrous cake into the fridge as it was too big for the freezer. Then I wiped the dripping trail off the floor.

Ten minutes later I checked on the cake, only to find whipped cream running down the shelf and into the veggie drawer. As I went to remove the sticky mess, the shelf gave way from the weight and collapsed into the drawer below.

Somehow I retrieved the cake in one piece, set it aside, and cleaned up the fridge, but first I sent my son back to the store. He returned with the tubs.

After spreading the tub whipped cream to the sides, I topped the cake with strawberries. Now all I had to do was write "Happy Birthday Tulip" with a tube of decorator frosting.

Darn it! The tube didn't come with a tip, so I dug out the decorating kit I'd bought two years prior but had never used and squeezed the frosting from the tube into the cylinder.

I soon discovered why that kit was such a bargain. It required muscleman strength to press on it to get the frosting out. My face was red after writing "Happy." I shook the numbness from my hands and decided to replace "Birthday" with "16th." By the time I wrote "Tulip," I was thankful I hadn't named her Elizabeth.

That night I pulled the cake out of the fridge. Voila! It was gobbled up in no time. The guests were clueless as to the comical scene that had played out just before they arrived, and that was my last attempt at a monster-sized cake.

Do you have a parenting or grandparenting memory
or another story you'd like to share?
If you're not a parent, memories from your own childhood count, too!

If you don't want to leave a comment but would rather contact me by email,
here's my address: lynkelwoohoo at yahoo dot com.
Posted by LynNerdKelley at 6:34 AM

I can't think of a story to share right now, but just want to say I love yours! :)

LOL!!!! Hooorah for whipped cream!!! What a cake to remember! Take care
x

But did the whipped cream make the vegetables taste better?

Holy smokes, I can't believe you pulled that off! If it had been me, the guests would've found me sitting in a puddle on the floor babbling incoherently. Luckily, my daughter just wanted to take some friends to a museum for her 16th. Fun story!

This scene was soooo familiar to me Lynn. My daughter is quite the cake decorator. She likes to make themed cakes. And it seems that even though the finished product is always amazing, something always goes amiss in the process. It's never smooth sailing. The last ones she made were Phineas and Ferb cakes for her best friends little brother, and the effort included multiple trips to the store for more frosting. She was up past midnight finishing them, left them out on the dining room table (they were too big for the fridge)and went to bed. In the morning I found them crawling with ants. It was sad to have to trash them. And her friends little brother had to wait until the next year before he got Phineas and Ferb cakes.

Old Kitty - Yep, that's one I'll never forget. And never attempt anything like that again!

Alex - I'll have to try the whipped cream and veggies sometime! LOL!

Morgan - Thanks a bunch! So glad you like the caption under the photos!

Jennette - You're very wise, sparing yourself from all that commotion and chaos!

Ruth - That's a shame that the ants invaded your daughter's masterpiece, after all her hard work. Dang! Thanks so much for sharing your story with me. I'm saving this one!

I'm laughing at the part about the muscle needed to squeeze the frosting! That's happened to me before--cake decorators must have one serious bicep on their decorating arm!
I liked making cakes for my kids, but once I said I'd make a big one for my father in laws 65th. I had so many problems, including the cake sliding all over the back of my minivan--I never made one that big again! :)

I've used those decorating things before. They are nasty. I don't make cakes. Nope. My hats off to you. I am amazed at how it all came together. Of course, in the end everyone is just happy to have cake. :)

Coleen - Seems like something always goes wrong when we tackle something so huge. It's hard enough to bake a monster cake, but then to have to transport it, yikes!

Debra - You're right. I think that I could have dumped pieces of cake in a giant bowl and mixed it with whipped cream and strawberries and everyone would have eaten it anyways! All that worry for nothing! LOL!

I can't believe it survived crashing, splitting, and dripping whipped cream! I am glad it had a happy ending!

Hey my last comment didn't post. I just left one, but had a really hard time with WP. Can you possibly add the URL option? That seems to work more consistently....
I know you are a day behind, so don't forget to come to my blog Wednesday (tomorrow!)

When the fridge shelf broke, I would have wept like a baby. Congrats on saving and serving that monster cake--and for blessing your child with a short name. (I'm partial to three-letter names or nicknames.)

I too love the top image, Lynn. "You're in for the ride of your life" indeed.

And thanks for sharing the fun cake story. So many things can go wrong when baking, especially when it's for an important party or dinner or what not. But end well, all well :)

Too funny! I wasn't sure this would have a happy ending and I'm so glad it did. Your poor fridge, though! What did you son say when he came home with the tubs? Oh, they just restocked???

I'm in awe at your tenacity for not only doing this (I would have given up and made a call to the local baker money or not after the the canned whipped cream fiasco...if I got that far: baking is not my forte).

So glad it turned out.

My only "baking experience" even similar was the chocolate birthday cupcakes that ended up being made with half a jar of powdered sage in them... And like your own story, no one seemed to mind.

Well, you wanted the birthday to be memorable, right? So you accomplished your goal! I have fond memories of my mom going to great lengths to make sure no matter what, that I always had a home-made birthday cake on my birthday, even if the party was going to be a few days a way. Hats off to you for being such a great mom.