Do Eerie Sounds Keep You Awake at Night? 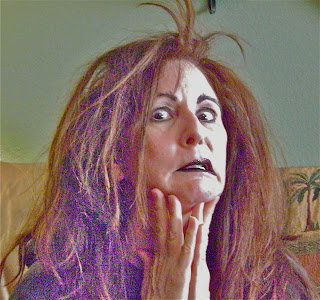 In my last post, Mystery of the Strange Ticking Sound, (if you missed it, you might want to go back and read it) I wrote about a weird noise my mom and I heard in the wall of our hotel room in Laughlin, Nevada. It got so loud, we finally switched rooms at 1:30 a.m. Never mind all the other mishaps thrown into the mix, but our trip ended without learning the source of the sound. Surely, there had to be an explanation. Would it nag me the rest of my life?
A week later I mentioned the strange ticking at my writers' meeting just as everyone gathered their things to leave. Maria agreed that, indeed, it might have been a ghost. Annie chuckled. "Sounds like the Death Beetle," she said. Alana agreed. The meeting broke up before I could get an explanation about the beetle.

I was left hanging, but at least I had a clue.
A Google search led me to Wikipedia, which states that Death Beetles are found in old buildings and can be heard on quiet summer nights making a ticking or tapping sound. It bangs its head against wood to attract a mate.

They often infest timber in old buildings, especially those built with oak. Many hospitals and churches became prey to the creepy head-banging bugs. Superstitious people believed the beetles kept vigil over the dying, which resulted in the spooky name of Death Beetle or Death Watch Beetle. 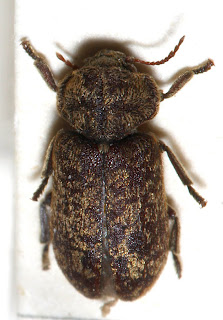 Eww! Beware - The Death Watch Beetle!
(Photo from Wikipedia)
The ticking & tapping noise attributed to this freaky beetle made perfect sense and would explain why  the sound stopped when someone knocked on our door. The Death Beetle was watching and listening, perhaps wondering if its mate had come a knockin'.
I do believe the mystery has been solved and I can move on now. Of course, I can't prove it. Perhaps it was a prankster ghost imitating the sound of the Death Beetle, just to creep us out. We'll never know for sure. All I can say is, I'm glad my house isn't infested with Death Beetles 'cause sleepless nights can wreak havoc on a writer's imagination.
Have you dealt with any strange sounds that kept you awake at night?
Posted by LynNerdKelley at 9:41 AM

No spooky noises keeping me awake at night UNLESS my husband's snoring counts.
Creepy about the beetles. I think I'd be spooked, too.

Oh this would make a wonderful story, Lynn. Your incredible sense of humor would make it priceless. I can't wait to hear it.

Maybe it was a ghost death beetle. Wait. A ZOMBIE death beetle. That's it. Give him some mechanical legs so he's a little on the steampunk side too and you've got yourself a nice little story villain. Editors will eat it up. :)

Creepy!!! I hate bugs. I don't have any strange sounds that keep me awake, but we do have crickets. I hate them. :P

The pipes in this house hum loudly, particularly at temperature extremes--the water pressure causes the noise, and it sounds like something's moaning. :P

Very interesting, Lynn. This is a new insect on me, I'll have to do some research on this one, sounds like something fun to, shall we say, infest, a story with :)

Ewww! No I'm going to having nightmares about strange noises, thanks a lot!

Emily - LOL about the snoring!

StephaniePQW - Thanks for the vote of confidence. I'm sure the strange noise will make it into one of my stories. I'm going to tell this true life incident in a Youtube video!

L.G. - Wow, I love your ideas, especially a zombie steampunk beetle! How cool is that?

Chantele - We have crickets, too, but they're not making any noise inside. Now, outside sounds like we're being invaded by them! No camping in our backyard!

Gene - I know you'll come up with something super creepy for these Death Watch Beetles. Love the idea of 'infesting' a story with them!

Jen - If you have nightmares about scary sounds, I hope you'll share them with us if you don't plan to use them in your writing! Hope the nightmares aren't too scary. I get nightmares, too!

Ewww that's disgusting... but also kind of unexpected. Who would've known that sound was a beetle??

Ha, I've not heard of such a beetle. They look mighty ugly. Hehehe

Yeah... on a farm where I lived in a haunted house, there were birds that tapped their beaks against the trees close by.

I was freaked until my dad told me about them.

I live in an old Victorian house so I try hard NOT to think about any sounds at night!

He he! The picture of the woman is hilarious and made me laugh! The one of the beetle...not so much :o0 Aren't they jsut the worst? :)

That is an UGLY guy! *shudder*

The house that I grew up in was haunted. We used to hear people walking around when we were downstairs and we KNEW no one was upstairs. And don't get me started on certain nights when I couldn't fall asleep because I was terrified I was being watched...

Gracie - No kidding. I never would have expected the sound to be a beetle, especially that loud, but crickets can be very loud, so now it makes sense.

Lynda - Yes, the beetle is mighty ugly. It grossed me out when I first saw it.

Misha - That's interesting about the birds making a scary tapping noise. And how was it living in a haunted house?

D.U. - Glad my picture made you laugh! I edited it to make it look creepier!

Melissa - OMG, that's spooky having to live in a haunted house and hearing ghost footsteps. And trying to sleep, I don't know if I could have. I would have been terrified, too. Do you write about some of those experiences in your stories?

I love everyone's comments because they sure make for great story ideas!

YIKES! That beetle is about as creepy looking as the 3-foot cockroach I saw at work!!!

Sounds like a pranksta ghost... it would have been funny if the ticking sound had followed you from room to room.

Hey, maybe the bellboy and other guests were ghosts. And maybe the hotel doesn't even exist...

Oooh! Love this post. I know about the death watch beetle through watching Practical Magic. Oh you should watch that movie--it's with Sandra Bullock and Nicole Kidman. I just love it!
Great pictures as usual!
Nutschell
www.thewritingnut.com

Glad you figured it out!!

Oooh, so creepy! We live out in the country, and coyotes sometimes wake us up. And owls. But we know what it is, so we're not afraid.

Eek that bug freaked me out... as did the lady pulling her hair out, lol.

When I hear weird noises I am glad my husband is near by because I have him check it out and then we cuddle until I can fall back to sleep. It also means from now on I need to stop watching reruns of Criminal Minds because it's starting to affect me.

That clears that up nicely, I think. To keep my imagination from going haywire, whenever I hear a strange sound I have to investigate. No if, ands, buts or maybes. I gotta know. Otherwise, I'll never sleep.

wub2write - I hate cockroaches, too, but at least they're quiet. No, it wouldn't have been funny if the ticking followed us to the other room! I like your theory about the bellboy and other guests being ghosts! Ooooooooh!

Julie - You're right about not being afraid when you know what's making the noise. Coyotes and owls can keep us awake, too, even if they're not scary.

Jen - Good thing your hubby is there to check out the noises for you. That's so cute that you cuddle up until you fall back to sleep. I know what you mean about Criminal Minds and other shows like that causing nightmares. Some of that graphic stuff just freaks me out!

J.L. - You would have gone bonkers in that hotel room because there was just no figuring it out at the time! I'm so glad I finally found out what it was!

Hey Mom,
I would have never have guessed that it was a death beetle. I had never heard about them before you mentioned them. It does make sense though. That's pretty funny that you and Grandma had change rooms in the middle of the night. Hahahah I can just picture that. Glad to hear that you pretty much figured out what it was.
Love Amy

Lyn - In answer to your question, I once wrote a short story about my great-grandmother - when I lived with my brother for a few months years ago, I always felt her presence in one of the rooms downstairs. It wasn't a threatening thing, but rather just like she was watching me. I never met her in real life as she died long before I was born.

Don't ya love it when the answer to a creepy mystery is something even creepier? Mwwaahaahaahaa...

Amy - Thanks for your comment. Yep, you can appreciate how silly Grandma and I would have looked trudging through the hotel hallway in our PJs!

Melissa - That's kinda neat that you felt her presence and she was watching over you. And I bet it's a neat short story, especially since it's true! Wow!

Annie - I can thank you for solving this mystery for me. Yes, the answer is creepy, but it sure has sparked some great comments and ideas for us! Thanks!